A24 isn’t just an award-winning film company—they’re a powerhouse with an impressive track record of catapulting art-house films into notable and celebrated releases. Their curation and vision have redefined crowds’ expectations of contemporary filmmaking and cemented the A24 brand as one of the most cutting-edge names in modern cinema.

We worked with A24 to develop a series of promotional websites for their slate of upcoming films. Partnering with developer Alphex Information Systems, we transformed high-quality film stills and key art into engaging websites designed to generate buzz about releases and drive more fans to discover the thought-provoking and exciting independent films synonymous with A24’s brand.

For each website, we translated aesthetic features of the film and supporting art assets into a memorable desktop and mobile experience. Moviegoers could immediately recognize the film’s unique character and effortlessly access theater dates, production information, and trailers.

We wanted more people to fall in love with A24’s releases and enjoy the films in theaters. We designed these websites to connect curious moviegoers to exciting new releases so they could help spread the word. When films open in a limited release capacity, websites like these are important to connect fans with theater dates and information so they don’t miss out on the early run of a film, which has implications for a film’s life in the theater, its success on streaming, and even its eventual physical media sales.

Locke is a psychological drama that unfolds in real-time as Tom Hardy, fresh off his iconic Bane performance in The Dark Knight Rises, races across England in his BMW. For the majority of the film’s 85-minute runtime, Hardy, remains the only actor on screen, holding conversations over speakerphone while his family, job, and connection to the past start to crumble before him. 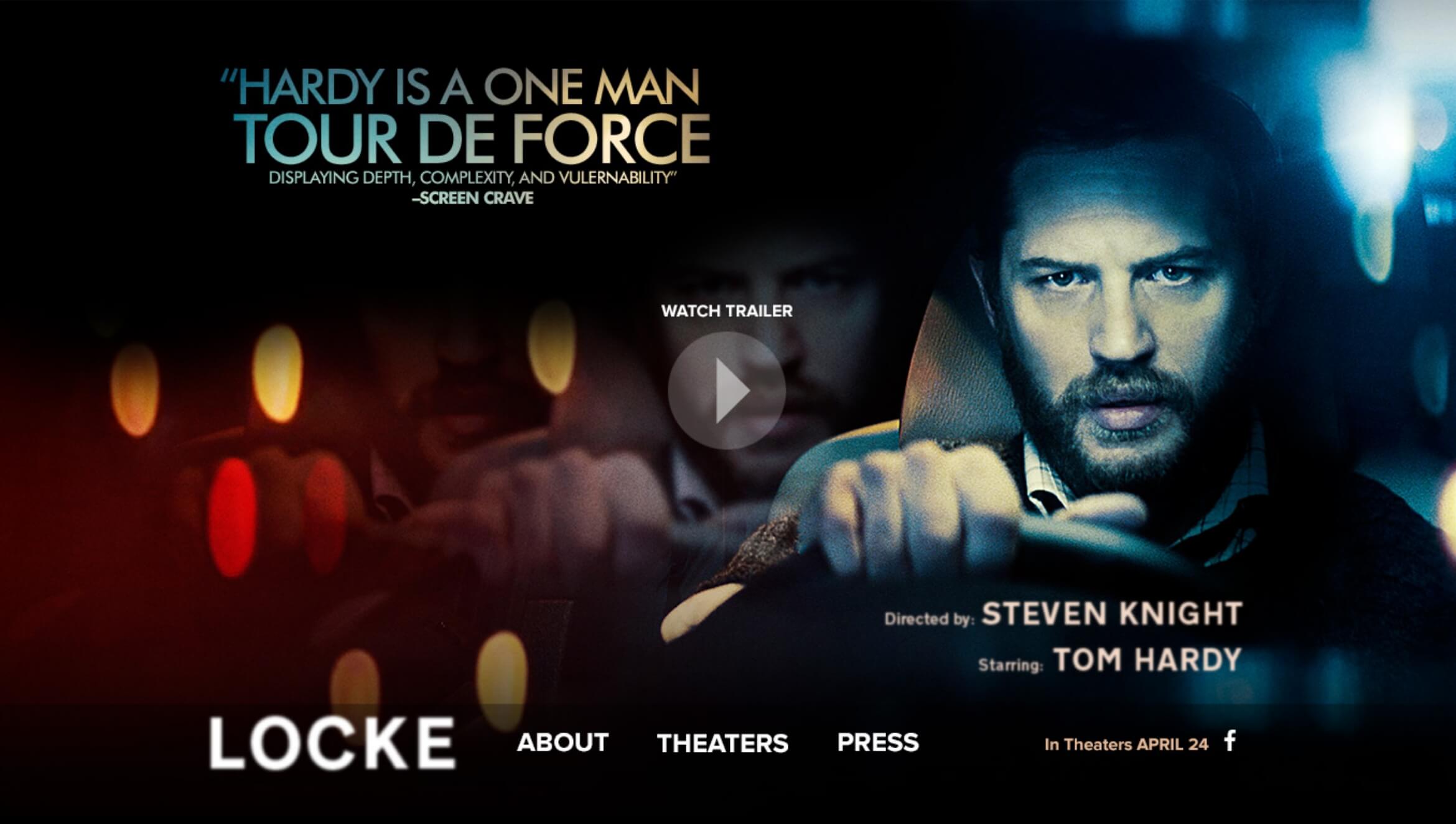 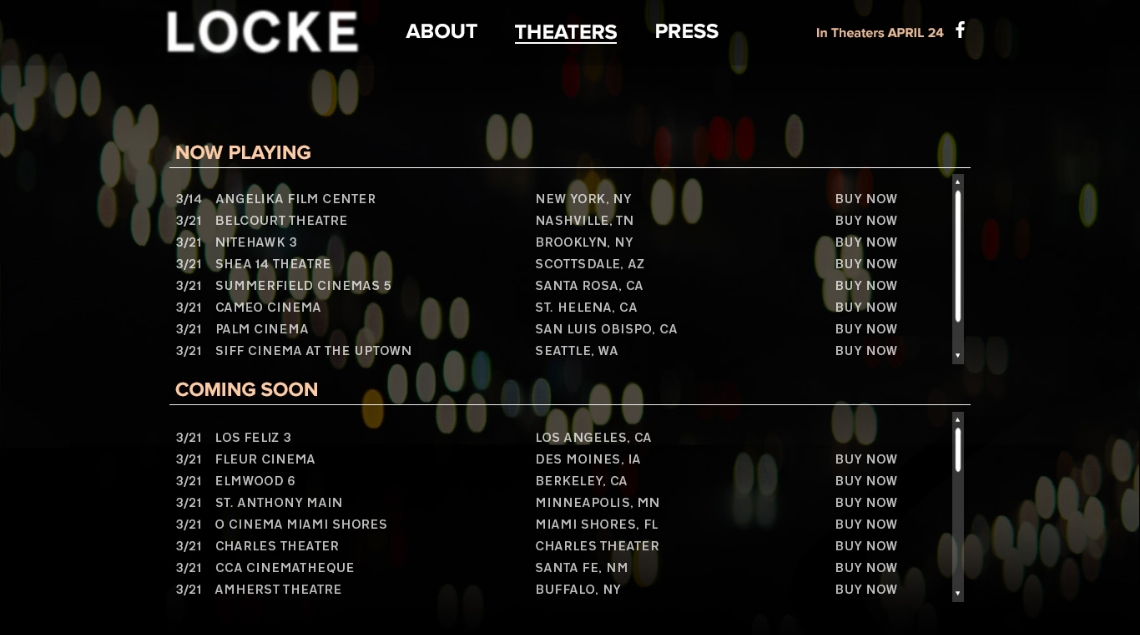 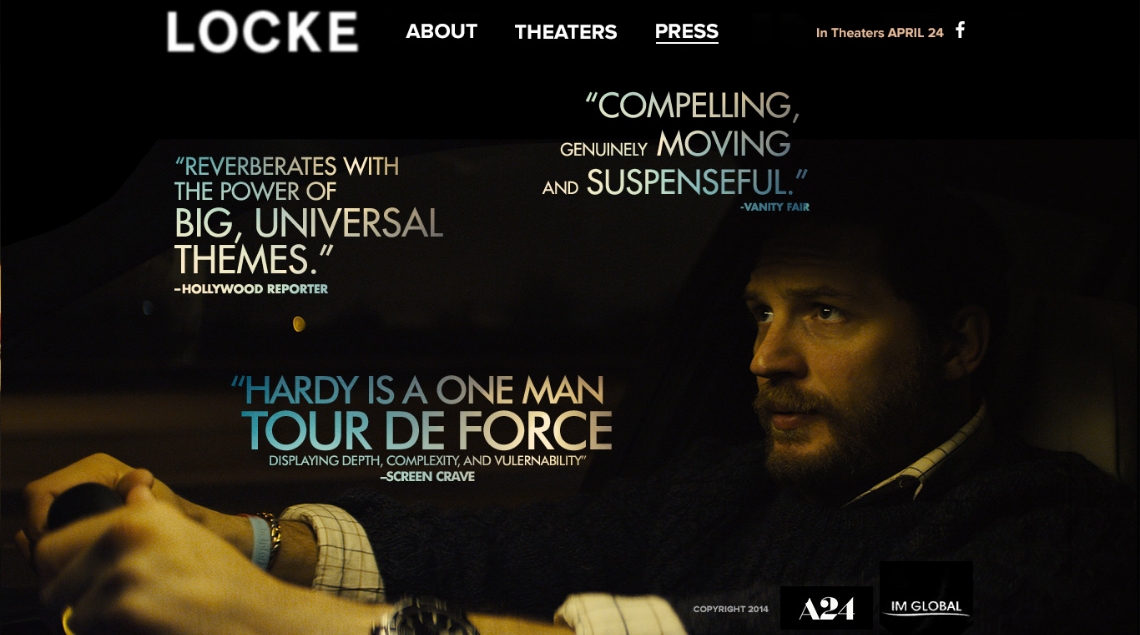 The website’s design showcases Hardy’s powerful intensity. It sets the tone for a film that promises to take viewers on a dizzying drive through both the streets and countryside of England and the mind of one of Hollywood’s most unique actors. The design introduces elements of the film by showcasing headlights and the way light hazily bounces off the landscape at night. The interplay between light and dark emphasizes the intimacy and distress of one man alone in his car navigating the shadows of his own life and psyche. We featured the trailer prominently to invite interested visitors to experience the unique tone and tension of this must-see nail-biter. 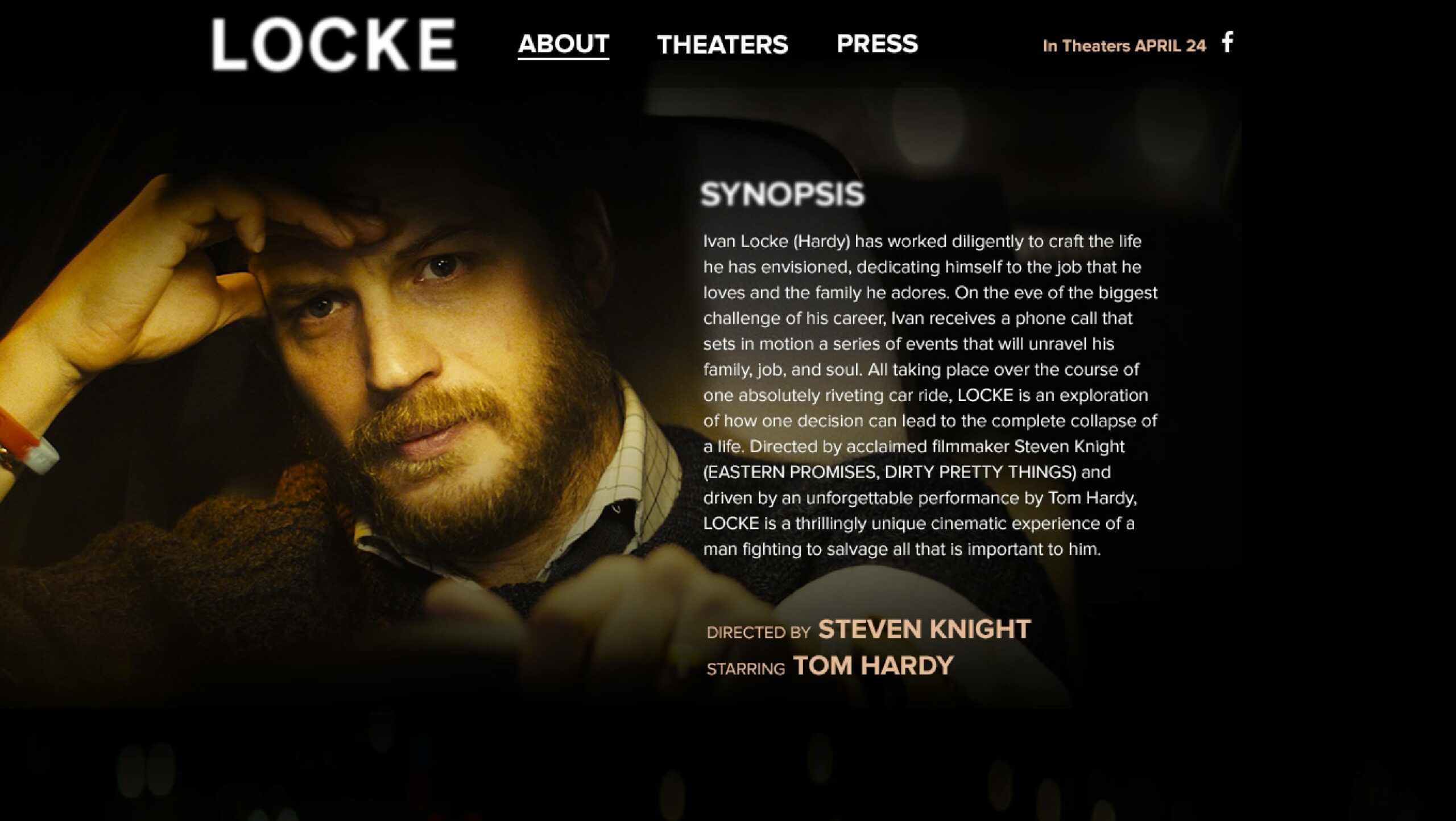 SON OF A GUN

Son Of A Gun is a heart-pounding crime thriller that cooks up a modern exciting thrill-ride from the genre conventions of the ‘70s-era gritty heist film. Starring Brenton Thwaites, Ewan McGregor, Alicia Vikander, and Jacek Koman, the film details the intensity of a life of crime raising questions of who to trust and what kind of future we can imagine for the protagonist as he becomes increasingly enmeshed in a web of criminal activity.

The website accents the design elements of the key art. We maintain a stark aesthetic that focuses on the momentary brutality of the characters. The red monochromatic color scheme and striking image of Ewan McGregor with his fist pulled back immediately impresses in the visitor’s mind the rage, gravity, and thrills at the heart of this film.

Like many indie films with unconventional release schedules, it was important to direct fans to theater dates and a DirectTV premier that preceded the short theater run. The site is powerfully simple, allowing visitors to easily navigate between press clippings, theater dates, and more information about the film so that it could find its early fans who are instrumental to a successful word-of-mouth campaign. 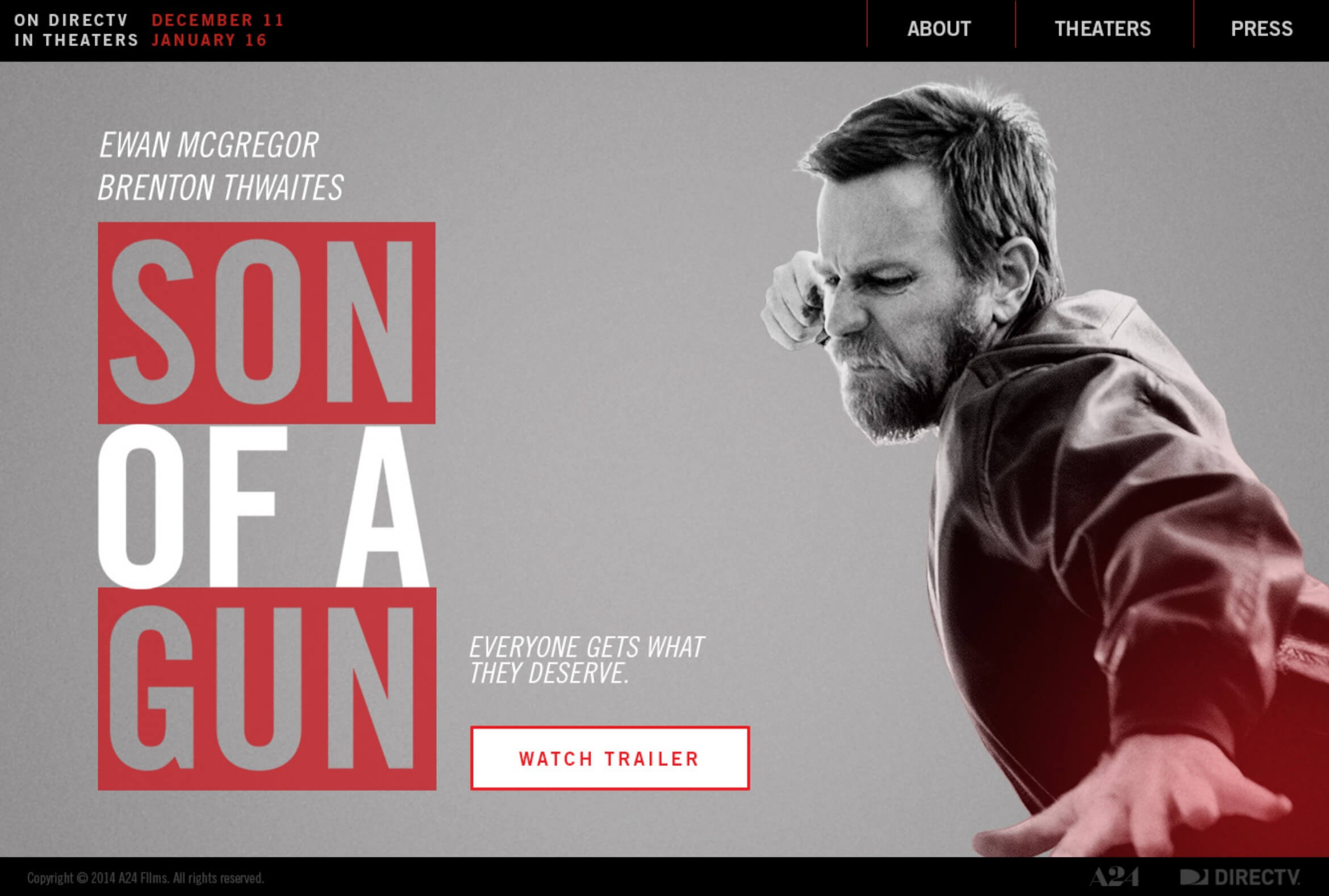 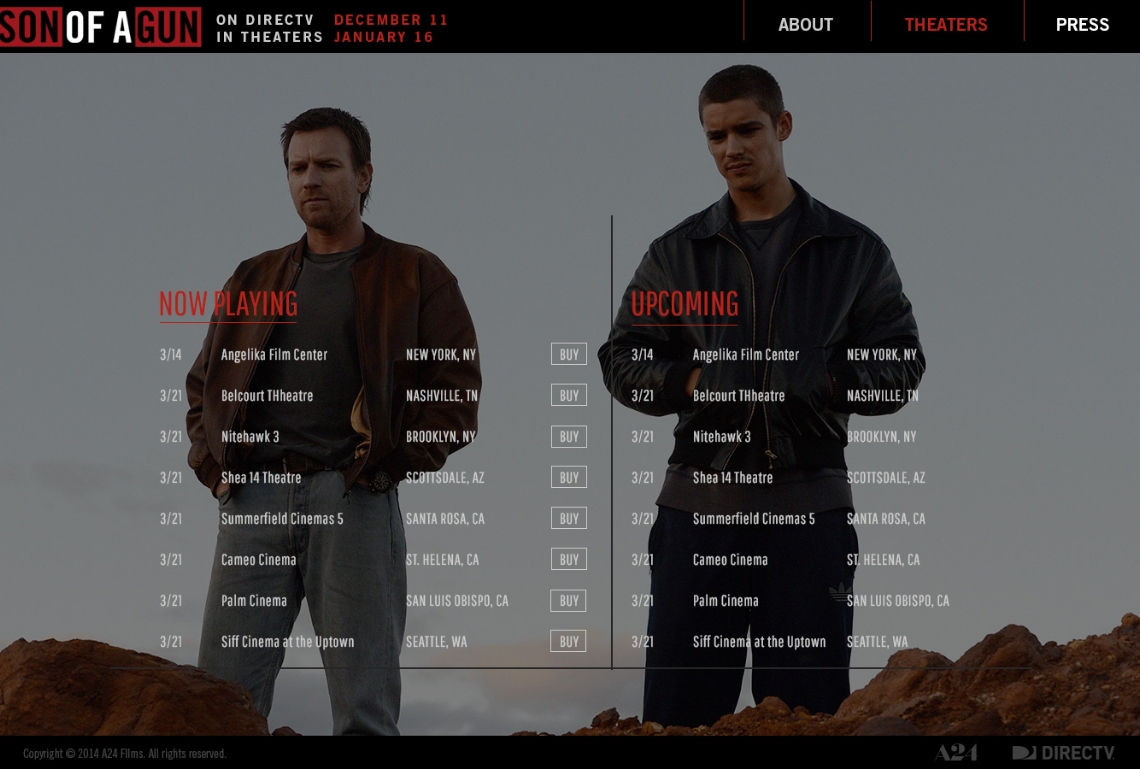 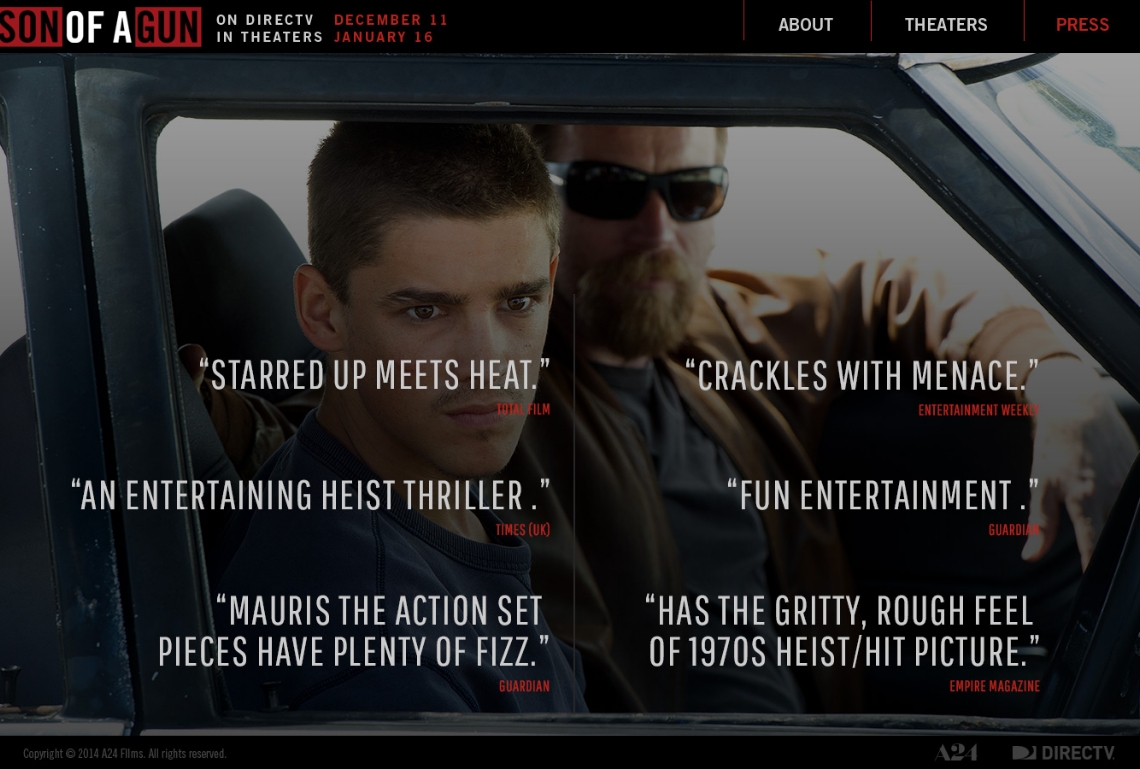 A MOST VIOLENT YEAR

Leaning heavily into homage to the great films of 1970s New Hollywood, J.C. Chandor’s A Most Violent Year is a New York period piece and crime drama. It showcases powerful performances by two actors who have now become household names, Jessica Chastain and Oscar Isaac. It’s a story about trying to make your way in the world and the financial, moral, and relational complications that are inherent in this struggle to make something of yourself without losing yourself completely.

The promotional website is designed around the attractive and intelligent key art that juxtaposes elegant soft-violet serif typography with the jarring title of the film. This intentional contrast evokes the gravity of human struggle at the heart of the film and pairs powerfully with a featured image of the star couple bathed in contrasting shadow and light standing strong together above the NYC skyline.

With this much star power, we knew the website had to highlight the actors prominently to steer visitors to the trailer and grow interest for the film. 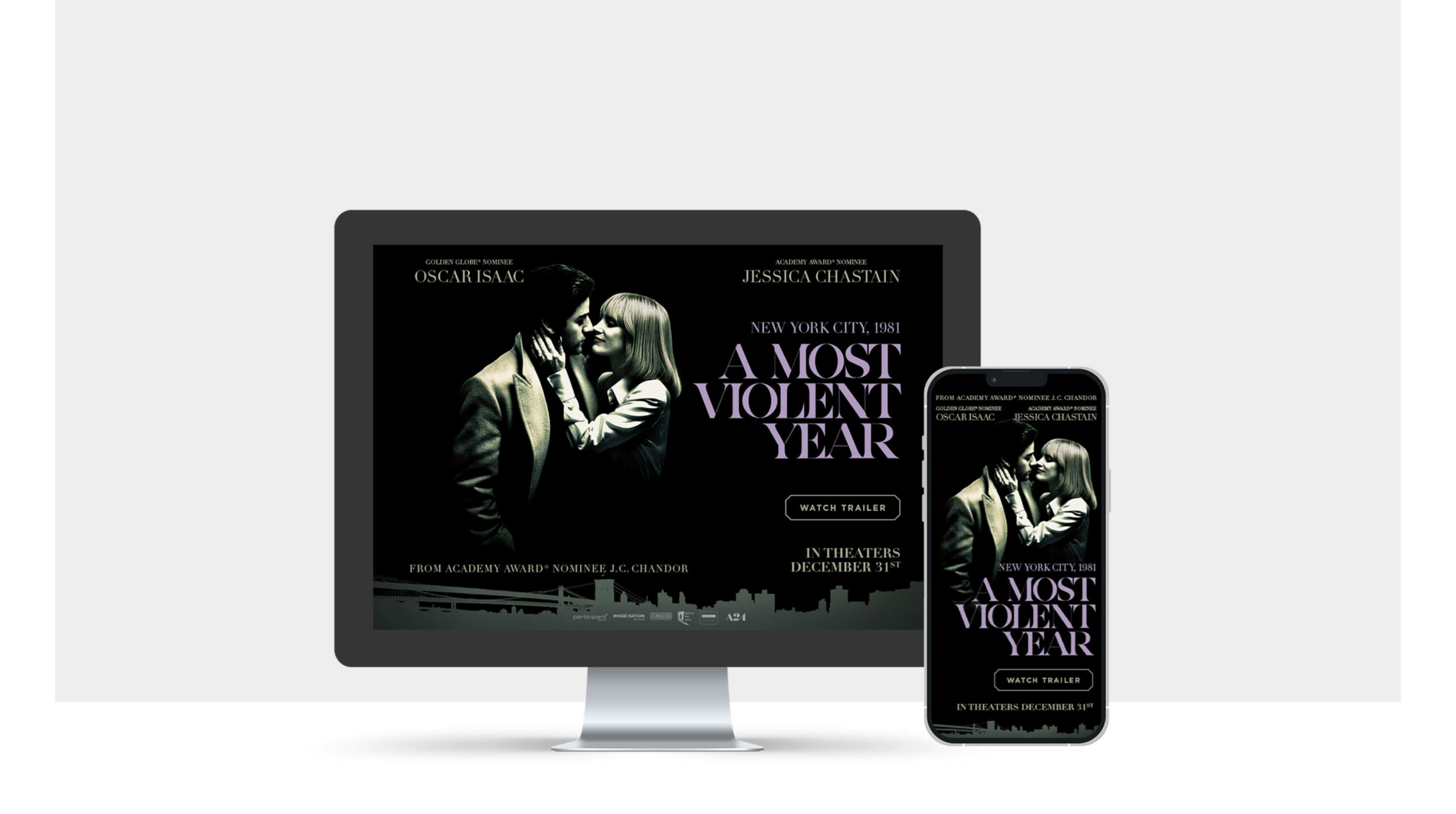 REVENGE OF THE GREEN DRAGONS

Revenge Of The Green Dragons is a 2014 crime drama executive produced by Martin Scorcese. It dives into Chinese-American gang life in the 1980s and ’90s in New York. Filmed in parts of Queens and Brooklyn, the film was directed by prolific Hong Kong filmmaker Andrew Lau and producer Andrew Loo. It features a cameo from Goodfellas star, the late Ray Liotta. 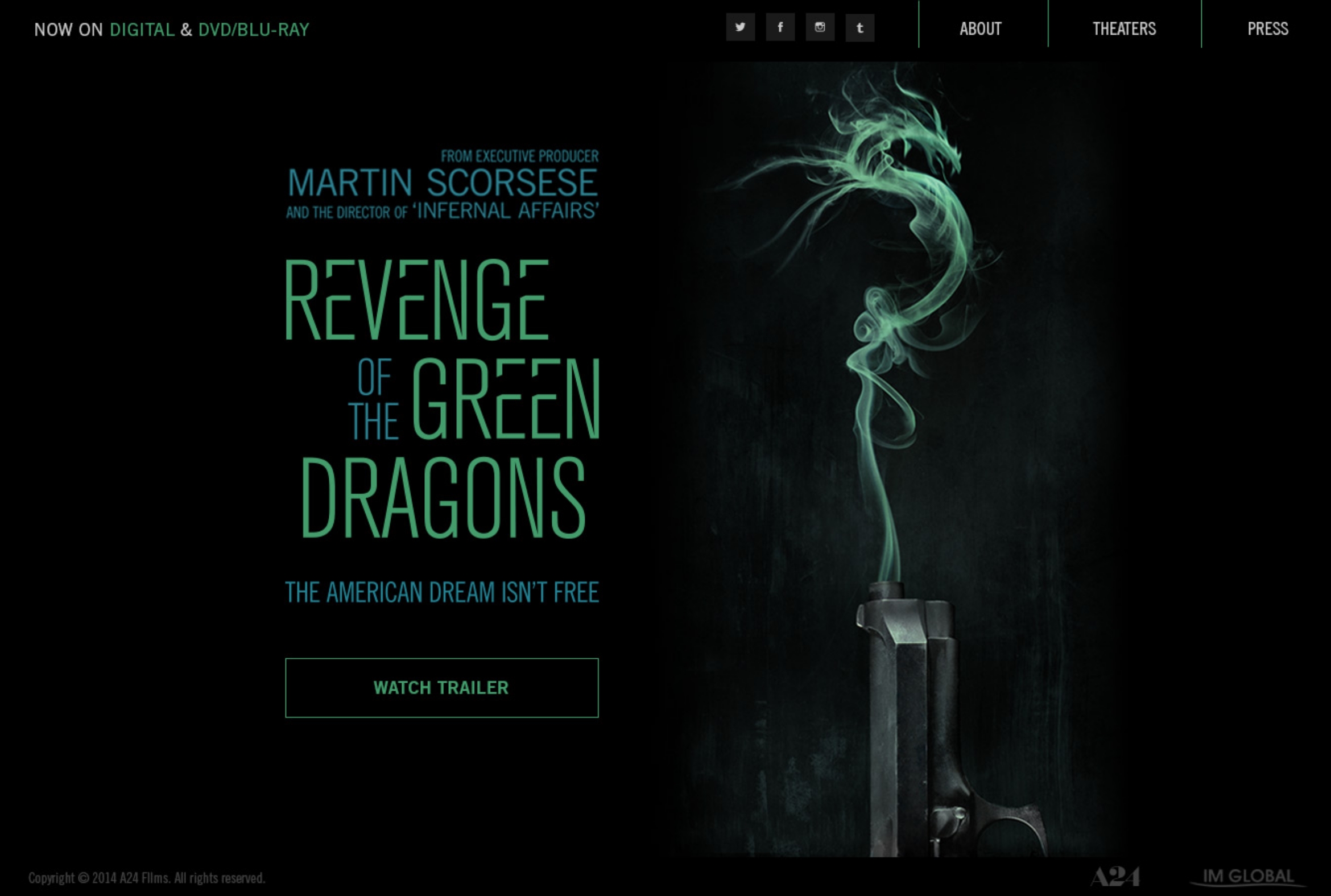 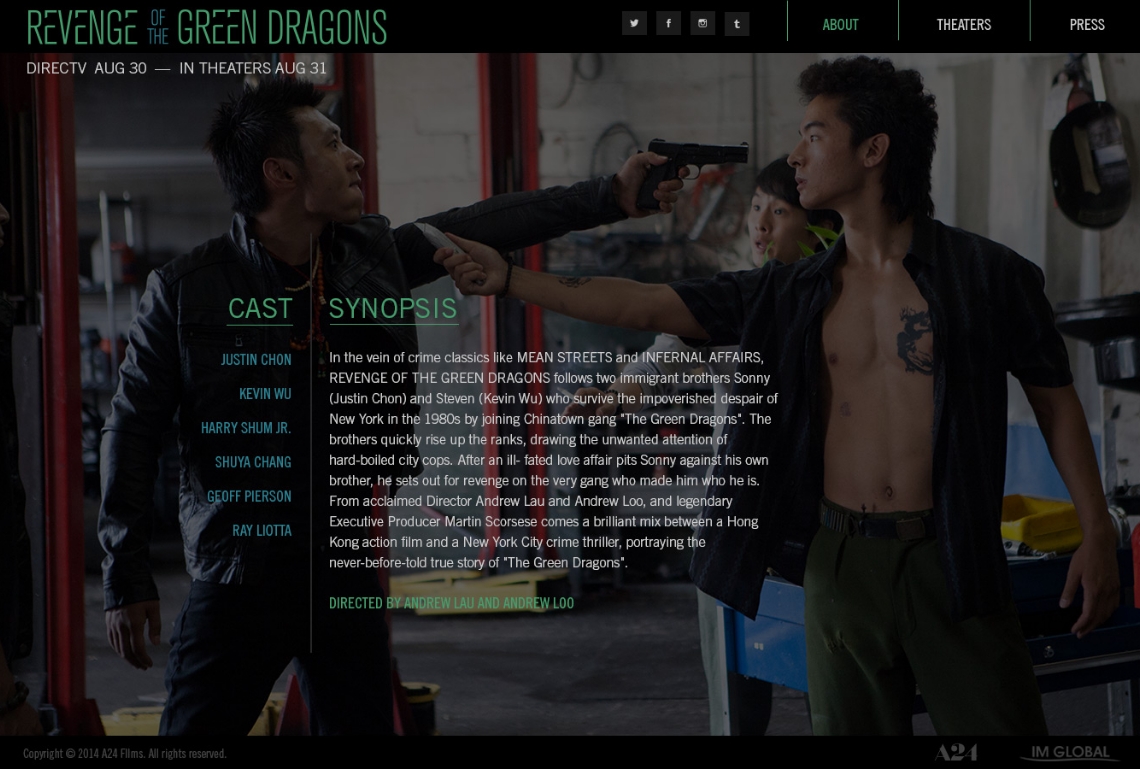 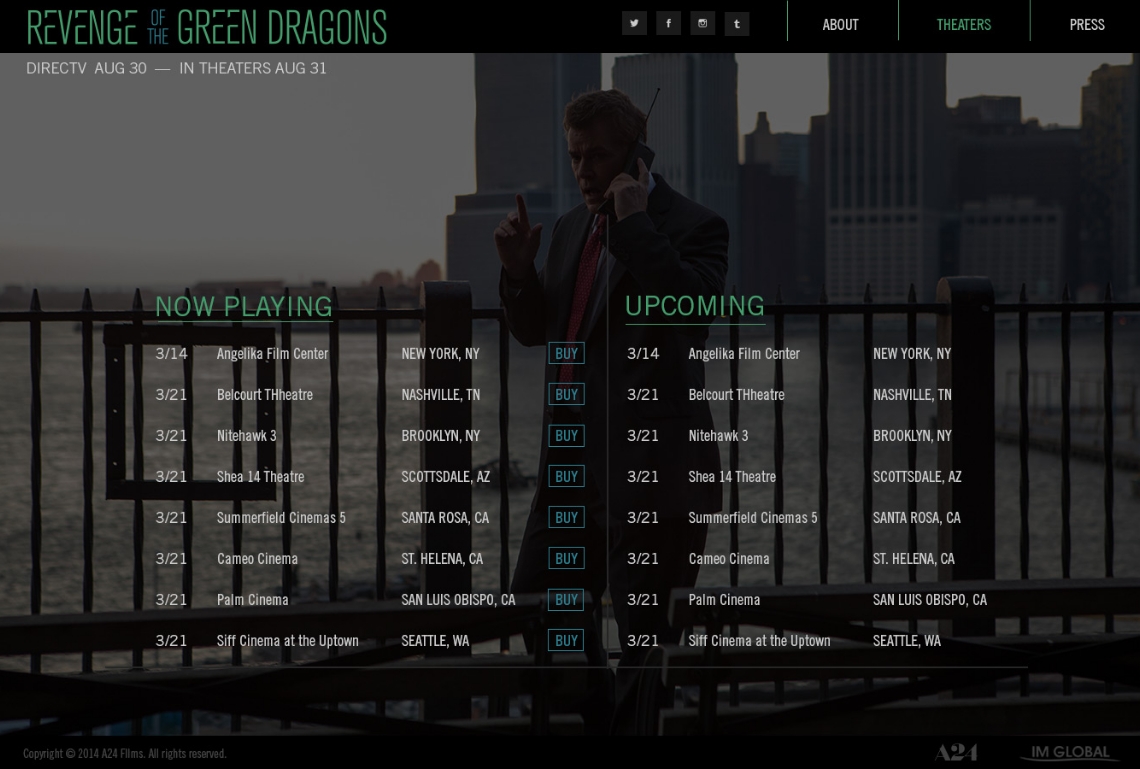 The website lays out important production and showtime information and highlights unique elements of the film’s tone. It draws visitors towards the trailer while also communicating that this film is both a unique Chinese immigrant story but also a film that takes inspiration from a long tradition of American gangster films. Key information is displayed prominently against stills of the film that capture the drama and raw energy of the story. 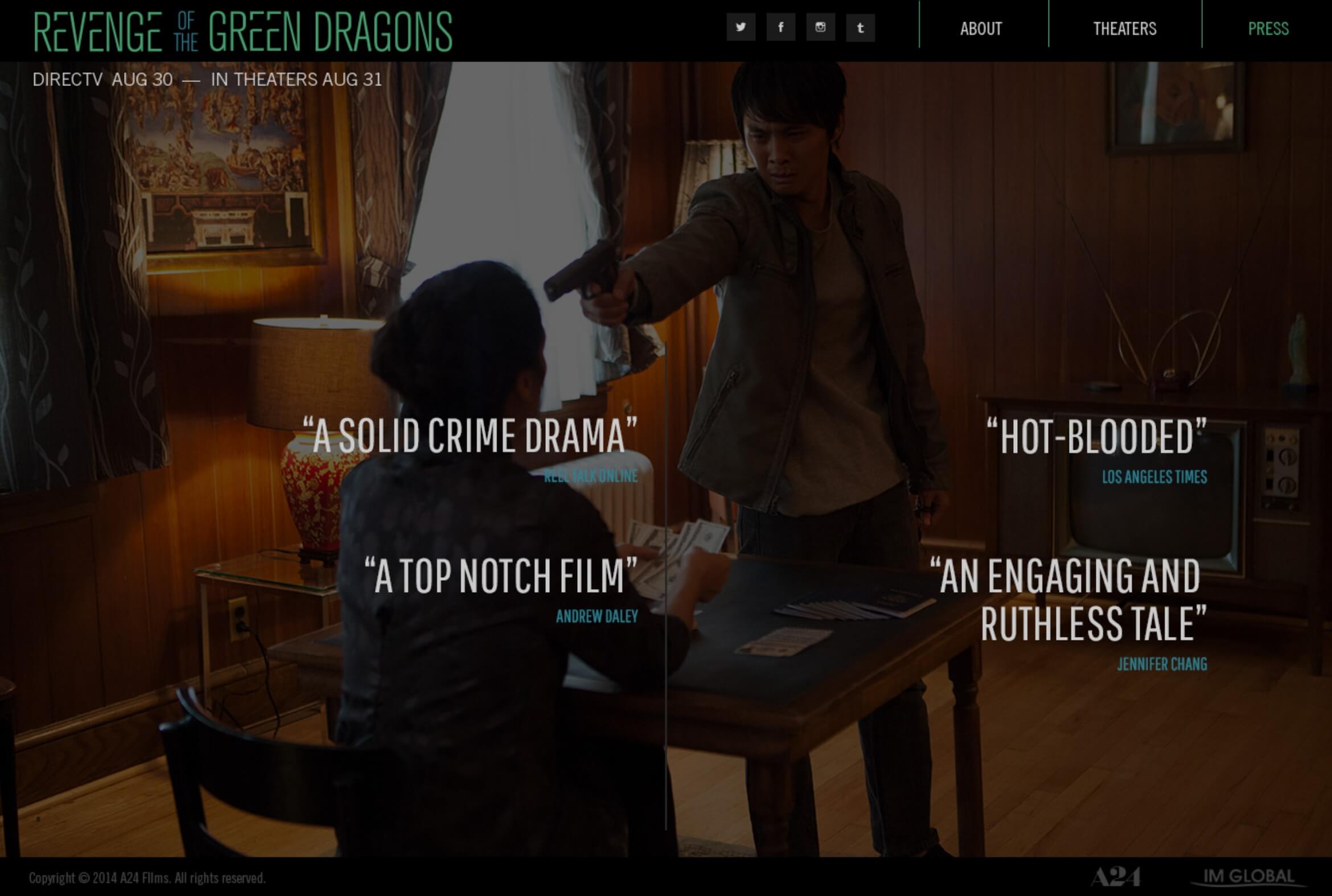 The Spectacular Now introduced the world to two young promising talents, Shailene Woodley (Big Little Lies) and Miles Teller (Top Gun: Maverick). The film is about an unexpected romance between two 18-year-olds that is told with sincerity and authentically calls to mind the feelings of young people on the precipice of adulthood. In one of his last reviews, Roger Ebert noted how rare it was for a film about young people to have actors who look and act their age on screen. 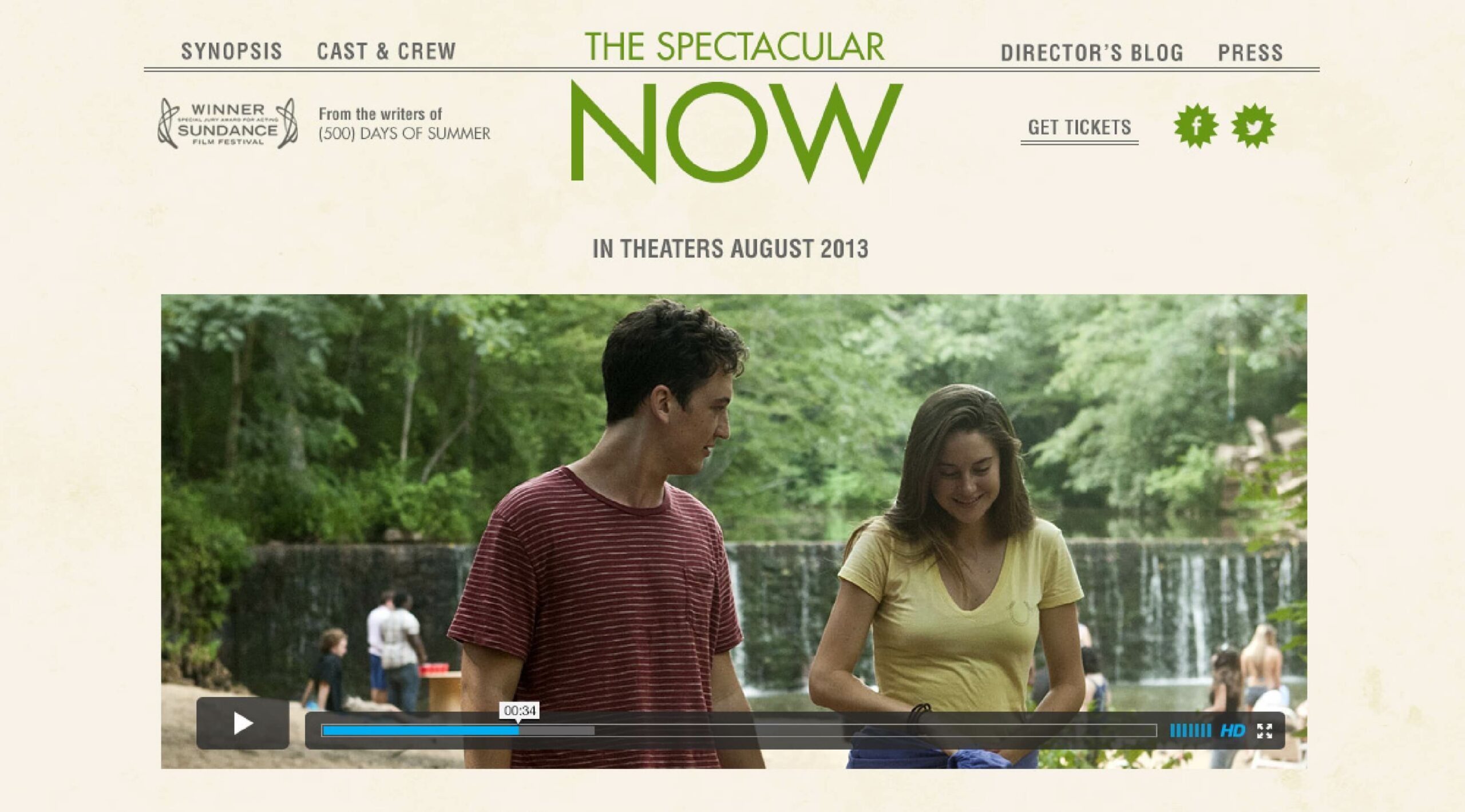 The coming-of-age film’s sweetness and credibility inspired us to design the promotional website on the Tumblr platform to have the look and feel of a young person sharing their inner thoughts and dreams with the world. Designing on a platform like Tumblr had its design challenges, but it helps position the film as part of a social space. The scrapbook and collage feel of the website evokes the energy of young love and gives the visitor a sense of the emotional vulnerability driving the film. The website also clearly highlights the film’s trailer, Sundance laurel, Director’s blog, and more. 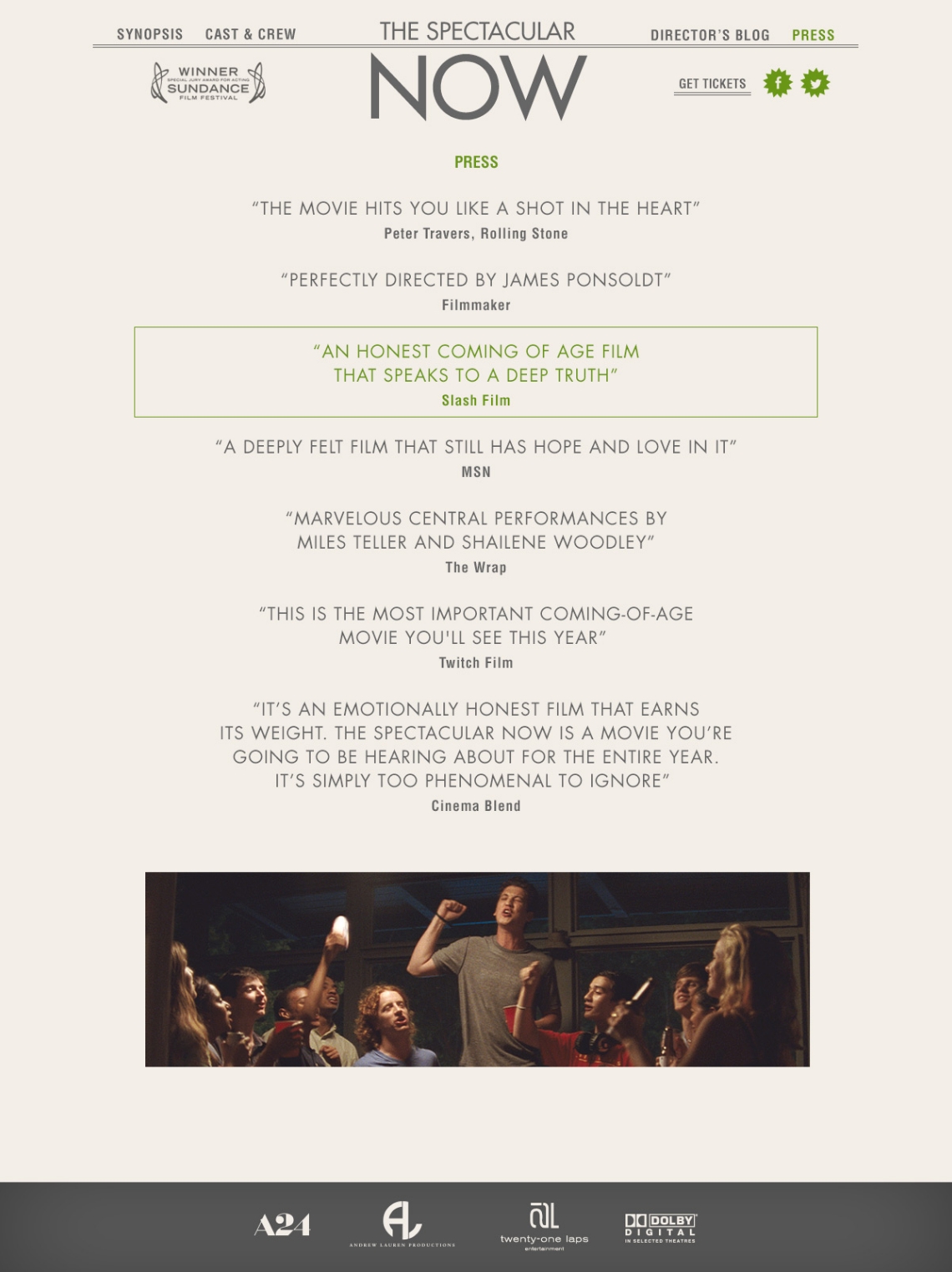 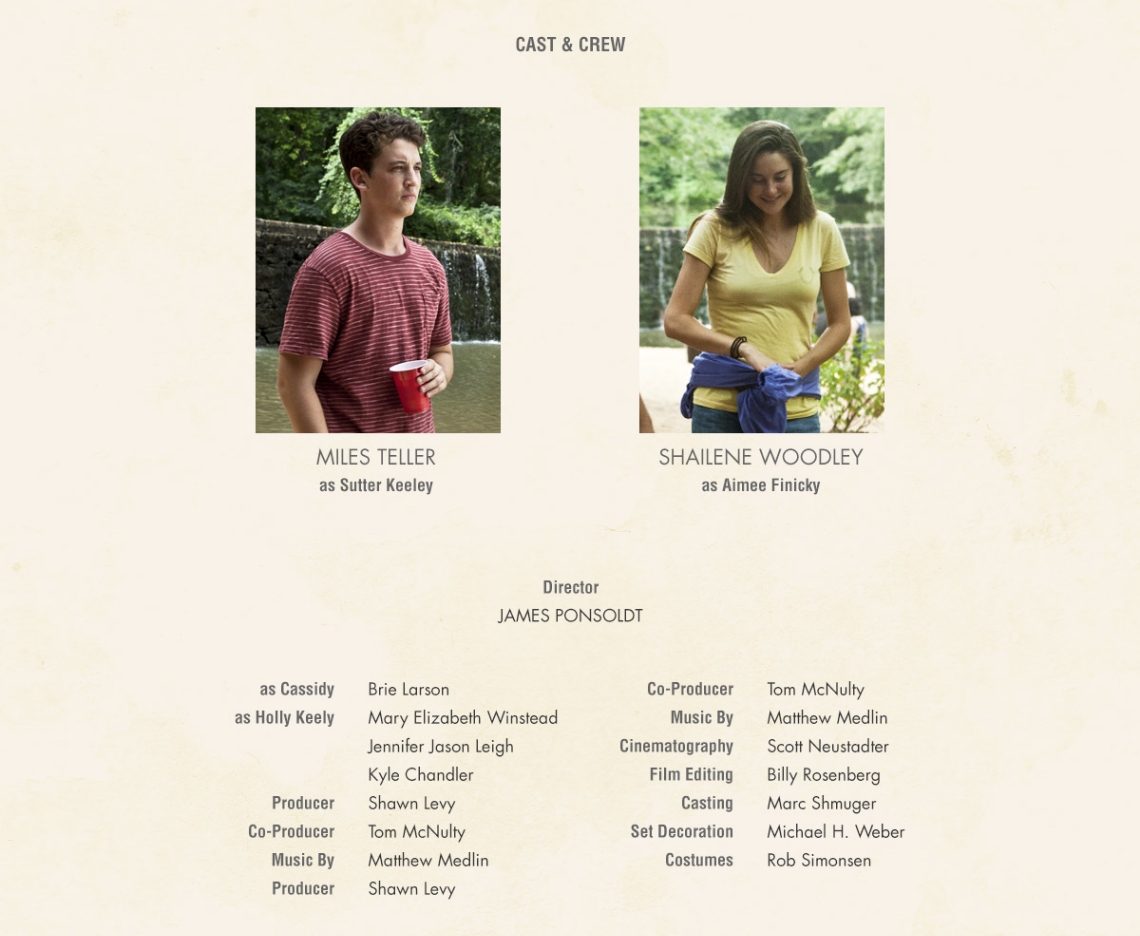 As a multi-disciplinary studio of artists and creatives, we love working on film projects, especially projects that drive more people—cinephiles and the curious alike—to watch great films. That’s why our work with A24 was an exciting opportunity to translate our user experience (UX) and graphic design expertise to deliver promotional websites that capture the essence of the film and make it easy for visitors to find out the key information they need to catch the film in theaters or learn more quickly so they can help spread the word of the exciting films coming out under A24.

The projects above represent our work with A24 and our ability to partner with developers to create promotional assets that are consistent with the aesthetics of a film and create long-standing first impressions that lead to more people enjoying more films.

To learn more and explore our other film work with Decal and IFC films, click here.

We enjoy taking on smaller projects that then become larger initiatives. There’s no project too big or too small for us. We’d love to hear what you have cooking.

Not ready to get started? Check out this free toolkit that walks you through everything you can do now on your own to set your website project up for success.

Reach out to start the conversation about your next big idea!

Questions? We can help you find what you’re looking for.

Please include your resume and link to your online portfolio.